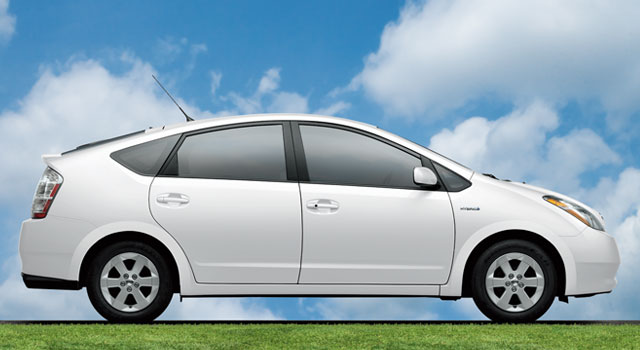 The Toyota Prius, which came out in Japan at the end of 1997, is designed to reduce emissions in urban areas. To accomplish this, Toyota has designed a parallel hybrid powertrain, called the Toyota Hybrid System (THS), that adds some of the benefits of a series hybrid. The Prius meets California's super ultra low emissions vehicle (SULEV) standard. It is a four-door sedan that seats five, and the powertrain is capable of accelerating the vehicle to speeds up to 15 mph (24 kph) on electric power alone. This contributes to the better city mileage than highway mileage. The Prius was the 2004 North American Car of the Year.

Unlike Honda, Toyota has focused primarily on the powertrain to achieve its emissions and mileage goals. The Prius weighs 2,900 pounds (1,315 kg) and has as much interior space and trunk space as a Toyota Corolla.

The Prius mainly relies on two features to optimize efficiency and reduce emissions:

(1) Its engine only runs at an efficient speed and load - In order to reduce emissions, the Prius can accelerate to a speed of about 15 mph (24 kph) before switching on the gasoline engine. The engine only starts once the vehicle has passed a certain speed. And once the engine starts, it operates in a narrow speed band.

Toyota designed the 1.5-liter engine in the Prius to run at a maximum speed of only 5,000 rpm, where it makes 76 horsepower. Keeping the maximum speed of the engine low allows for the use of lighter components that improve efficiency.

The electric motor on the Prius is rated at 67 horsepower from 1,200 to 1,540 rpm. It produces 295 pound-feet of torque from 0 to 1,200 rpm, which is more than enough to get the car going without the aid of the gasoline engine.

The power split device is the heart of the Toyota Prius. This is a clever gearbox that hooks the gasoline engine, generator and electric motor together. It allows the car to operate like a parallel hybrid -- the electric motor can power the car by itself, the gas engine can power the car by itself or they can power the car together. The power split device also allows the car to operate like a series hybrid -- the gasoline engine can operate independently of the vehicle speed, charging the batteries or providing power to the wheels as needed. It also acts as a continuously variable transmission (CVT), eliminating the need for a manual or automatic transmission. Finally, because the power split device allows the generator to start the engine, the car does not need a starter. When you accelerate, initially the electric motor and batteries provide all of the power. The ring gear of the power split device is connected to the electric motor, so it starts to spin with the motor. The planet carrier, which is connected to the engine, is stationary because the engine is not running. Since the ring gear is spinning, the planets have to spin, which causes the sun gear and generator to spin. As the car accelerates, the generator spins at whatever speed it needs to in order for the engine to remain off. You can see all of this below: 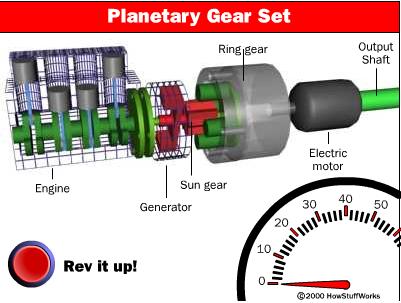 Once you reach about 40 mph (64 kph), the gasoline engine will turn on. The generator suddenly changes speed, causing the planet carrier to turn and start the engine. Once the engine is running, it settles into a constant speed while the generator varies its speed to match the output speed with the electric motor. If you are really accelerating hard, the motor will draw extra power from the batteries. Once you are up to freeway speed, the car will move under a combination of gas and electric power, with all of the electricity coming from the generator.

Like the Insight, the Prius never needs to be recharged; the onboard generator automatically maintains the proper level of charge in the batteries.

Both the Honda and the Toyota have long warranties on their hybrid components. The Insight has an eight-year/80,000-mile warranty on most of the powertrain, including batteries, and the Prius has an eight-year/100,000-mile warranty on the battery and hybrid systems. The motors and batteries in these cars typically don't require any maintenance over the life of the vehicle (however, if you do have to replace the batteries after the warranty expires, it will likely cost you several thousand dollars). The engine doesn't require any more maintenance than the one in any other car, and because both hybrids have regenerative braking, the brake pads may even last a little longer than those in most cars.
Top
Post Reply
1 post • Page 1 of 1