Everybody knows about this film now. Some of you might have already seen it. But thought I would add my comments as well. It's simply superb. 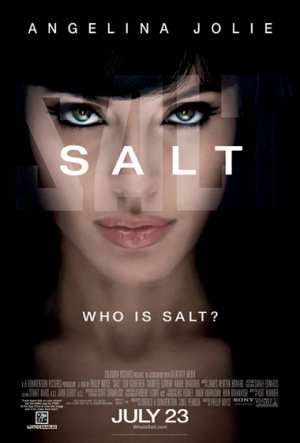 In a prison in North Korea, CIA agent Evelyn Salt (Angelina Jolie) is being tortured on suspicion of being an American spy. Released as part of a prisoner exchange, she is collected by fellow agent Ted Winter (Liev Schreiber). Waiting for her is the German arachnologist Michael Krause (August Diehl), who Winter states had campaigned tirelessly for her release. Salt then agrees to marry Krause as a result of his intervention to save her from the ordeal, but she warns him that she works for the CIA and that "he is not safe with her."

Salt, shocked by the accusation, calls her husband because she realizes that he is also in danger; he does not answer. When Winter and Peabody (Chiwetel Ejiofor) decide to detain Salt, she escapes and makes her way back to her apartment building. Finding signs that Michael was kidnapped, Salt takes her weapons and one of Michael's spiders.

After evading CIA pursuit Salt takes a bus from D.C. to a hotel in New York City. While at the hotel she extracts venom from the spider and dyes her hair black. Salt makes her way to St. Bartholomew's Church, where the Vice President's funeral is taking place, evading pursuit and eventually setting off a demolition charge during Matveyev's eulogy. Matveyev falls through the floor and Salt shoots him. She sees Peabody approaching through the rubble but does not shoot him. She surrenders but escapes NYPD custody and takes a boat to see Orlov. On her way, in a series of flashbacks, Salt remembers growing up in the Soviet Union where Orlov trained her and many other children to obey him and infiltrate the American government. Orlov congratulates her on killing Russia's president, but criticizes her decision to marry as it was not part of her mission. Orlov then has Michael killed in front of Salt as a test, but she does not react. He then briefs her on her next mission: the commandeering of the U.S. nuclear arsenal and the assassination of sitting American President Howard Lewis (Hunt Block). Once he has finished, Salt stabs Orlov with a broken vodka bottle and then kills the other agents as well.

Salt continues with Orlov's mission, meeting a fellow KA agent named Shnaider (Corey Stoll), currently disguised as Czech NATO liaison Edvard Tomas. The two of them infiltrate the White House, where Shnaider sets off a suicide bomb, causing the President to be moved to the lower bunker, with Salt in hot pursuit. With everybody's attention focused on Salt, Winter kills everyone in the bunker except for President Lewis, whom he knocks unconscious, thus revealing himself to also be a Russian sleeper agent. He then takes over the defense computers enabled by the President, and begins preparations to launch nuclear missiles at Mecca and Tehran. Salt manages to penetrate the bunker, reuniting with Winter and realizing he is also a KA agent. Salt asks to join Winter, but he refuses after seeing news that prove Salt's duplicity: Matveyev is alive. His mistakenly-reported death was actually a temporary paralysis caused by spider venom. Salt manages to break into control room, where she fights Winter over the nuclear football; during the fight, Winter criticizes Salt for falling for Krause instead of trying to recruit him to their cause, and reveals he arranged for Orlov's appearance and Krause's kidnapping. Salt eventually aborts the launch, but is arrested by Secret Service. On the way out of the White House, Salt manages to use the chain of her handcuffs to choke and kill Winter.

Salt is put on a helicopter with Peabody and she explains everything to him; because "they took everything from her" she wants revenge. Salt also tells Peabody that there are "many more" remaining agents trained by Orlov. A skeptical Peabody eventually accepts she is telling the truth after receiving an SMS saying that Salt's fingerprints were found at the barge, confirming her betrayal of Orlov. Peabody uncuffs Salt, and tells her to "Go get'em!" before she jumps into the Potomac River.
Top
Post Reply
1 post • Page 1 of 1