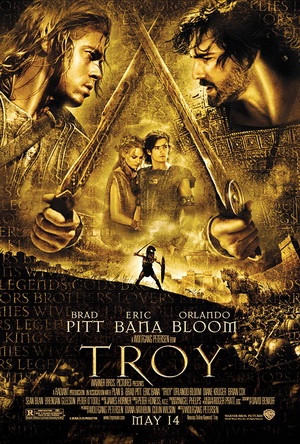 Based on Homer's "The Iliad", In Sparta, Prince Hector (Eric Bana) and his young brother Paris (Orlando Bloom) negotiate peace between Troy and Sparta. Paris has fallen in love with Helen (Diane Kruger), the wife of king Menelaus (Brendan Gleeson), and smuggles her back to Troy with him. Infuriated, Menelaus vows revenge. Menelaus approaches his brother Agamemnon (Brian Cox), a king who has conquered every army of greece, and now commands them. Agamemnon who has wanted to conquer Troy for years(which would give him control of the Aegean Sea), uses this as a justification to invade troy. General Nestor (John Shrapnel) asks him to take hero warrior Achilles (Brad Pitt), to rally the troops to the cause.

Odysseus (Sean Bean), a king commanded by Agamemnon, visits Phtia to persuade Achilles to fight, and finds him training with Patroclus (Garrett Hedlund), his cousin. Pondering his decision, he visits his mother Thetis for advice. She tells him she knew this day would come, before he was even born. She also tells him that if he does not go to Troy, he will live a long happy life and have children, however after he dies, his name will be lost and nobody will remember him. If he does go to Troy, he will find great glory in his battles and his name will be written into history forever, however he will die.

The Greeks sail for Troy. Achilles and the Myrmidons are the fastest rowers and land before anyone else. They kill many Trojans and desecrate the temple of Apollo. Briseis (Rose Byrne), a member of the Trojan royal family, is captured and taken as a prize to the Greeks, despite Achilles' claim to her.

Achilles and his Myrmidons do not fight the next day because of Agamemnon's unfair claim to Briseis. With Greeks surrounding Troy, Paris challenges Menelaus to a duel to settle things. Menelaus agrees, however Agamemnon plans on attacking the city regardless of the outcome . Paris is easily defeated, and wounded, but not killed. Hector intervenes and kills Menelaus. The Greeks charge the Trojan lines but are forced to fall back when they are nearly wiped out by archers on troy's walls.

Agamemnon gives Briseis to his men, but Achilles rescues her. He carries her back to his tent and tends her wounds. Briseis then tries to kill Achilles, but realizes that she has feelings for him and the two make love. The next day Achilles is readying his men to leave, much to Patroclus' indignation.

The Trojans launch a surprise attack. As the Greeks seem to be on the verge of defeat, Achilles appears with the Myrmidons and joins the battle, eventually fighting against Hector. All are shocked when Hector cuts Achilles' throat. However, Hector kneels and pulls Achilles' helmet off revealing it was really Patroclus whom he has mortally wounded. Both armies agree to end fighting for the day, and Odysseus informs Hector who he had killed. Achilles, who had slept through the battle, is told by Eudorus of his cousin's death. The Greeks had also mistaken Patroclus for Achilles, since he had put on the same armour, and moved the same: Achilles furiously vows revenge. Later that night, Achilles lights Patroclus's funeral pyre.

The next day, Achilles approaches the gates of Troy alone and demands Hector to come out and face him. The two fight an evenly matched duel at the start, but Achilles soon takes the advantage. In the end Achilles kills Hector. He then ties the body to the back of his chariot, dragging it back to the Greek camp, leaving all the Trojans shocked. That night, King Priam (Peter O'Toole) visits the Greek army's camp to retrieve Hector's body. After the King makes his plea Achilles acquiesces to his request and allows him to take his son to be buried, promising him the 12 days for funerary rites. Achilles lets Priam take Briseis back as well. He later gives Eudorus one last order: to take the Myrmidons home.

During the twelve days while Troy mourns Hector's death, the Greeks plan to enter the city using a hollowed-out wooden horse, devised by Odysseus, desperate to stem the slaughter of his own men at the hands of the Trojans. The Greeks leave the horse at their camp, then depart, hiding their ships in a nearby cove. Priam believes his priests that the horse is an offering to Poseidon and a gift. Assuming victory, the Trojans take the horse into the city and celebrate. A Trojan found the Greek ships hiding in the cove but is killed by the Greeks before he could tell the news. A band of Greeks come out of the horse at night, opening the gates to the city, allowing the main army to enter. The unprepared Trojans are overwhelmed and slaughtered. As the city burns, Agamemmnon and Odysseus fight their way with their army to the palace, killing Glaucus and Priam in the onslaught.

While Troy is sacked, Paris sees Aeneas together with Andromache and Helen and many others escaping Troy through a secret passage and hands him the sword of Troy, saying, "As long as it remains in the hands of a Trojan, our people have a future. Protect them Aeneas; find them a new home."

Achilles searches desperately for Briseis, who is being threatened by Agamemnon. She kills him with a concealed knife, and is saved from his guards by Achilles. While Achilles is helping Briseis to her feet, Paris shoots Achilles in his vulnerable heel, and then several times in the torso. Briseis runs to Achilles, surprising Paris. Achilles urges Briseis to join Paris as they escape the city. Achilles watches the others flee, then dies of his wounds. The soldiers arrive to see the fallen Achilles with only a single arrow through his heel, as he had removed all the others from his chest, fulfilling the myth that Achilles was killed by a single arrow to the heel. Funeral rituals are performed for him in the ruins of Troy the next day. The film ends with a speech from Odysseus; "If they ever tell my story, let them say I walked with giants. Men rise and fall like the winter wheat, but these names will never die. Let them say I lived in the time of Hector, tamer of horses. Let them say I lived in the time of Achilles."
Top
Post Reply
1 post • Page 1 of 1