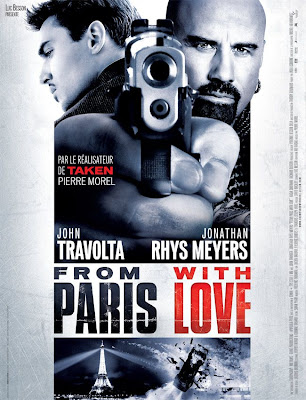 You never know what you are going to get. With From Paris with Love, you see two distinctly different marketing strategies. One set of trailers and TV spot bills it as a hard-boiled action flick, with Travolta unleashing a fury of bullets. The other focuses on the much lesser known Jonathan Rhys-Meyers as he deals with the comedic situations placed on him through the Travolta character. If you can go in with an open mind, you'll see that both approaches ring true for better or worse.

Our story starts with a long dose of James Reece (Jonathan Rhys Meyers). He's the personal aid to the U.S Ambassador to France. Known for book smarts, his side task of spying for his country affords him the opportunity to place bugs and switch plates. At his flat, his girlfriend Caroline (Kasia Smutniak) has to deal with being kept in the dark. When the opportunity for more dangerous work presents itself, Reece is given a partner in the form of Charlie Wax (John Travolta). Wax is a fast-talking, trigger-happy, manic whose order to do as he pleases may just be too much for Reece.

The two J's make for a great team. On one end you have Reece leading the audience into the underground world of mayhem while trying to keep his wits about him. On the other there is the everyman's adrenaline junkie who may not be too old just yet. And for what it's worth, in a throwaway action flick, there's a genuine sense of fun in the air. However, the emphasis on mindless chaos puts a damper on the mood. There are numerous moments where the pace hiccups all the way to 11. I sure would have appreciated a briefing of sorts instead of a simple kill everyone mentality. Even with the agenda to smite the terrorists, there is an explosive moment near the end that exists for zero narrative purpose. Maybe Wax was having so much fun flirting with diegetic sound that he forgot to fire his bazooka, opting instead to save it for a more dramatic moment. You just can't have the kill happy hero abort and purse a target at the same time.

From the director of Taken, Pierre Morel, comes a tale based on a short story from Luc Besson. I'm not sure what that's going to mean to the average moviegoer, whether you factor in Morel's short resume at the helm or the sporadic nature of Besson's screenplays. What I saw from a crew standpoint was a throwback to the '80s and '90s action genre. Gun use doesn't provoke bullet-time effects. You can bet Travolta has a stunt double. Most importantly you can understand what's happening during the fights. I can't even count how many films edit around the action these days to the point that you have no honest idea of who's still standing. If you are sick of The Dark Knight method of shooting fists juxtaposed with fallen bodies, From Paris with Love will be a good movie for you.

Wax is a character that is unfortunately placed in the narrative's backseat. To better understand what I'm talking about, look at Lethal Weapon. In that film the two cop buddies have a developed background. We see their homes, we see Murtaugh's family and Riggs' dog. Well in From Paris with Love the only character you get to know the history of or see the private love of is Reece. At 92 minutes, there certainly could have been time allotted to explore Wax, but the screenplay shuns it. Maybe some time to cool down with his side of life would have helped reduce the jerky pacing. Man, I feel the love for you Paris but I'm not sure that I'm getting it back.

A personal aide to U.S. Ambassador in France, James Reese (Jonathan Rhys Meyers) has an enviable life in Paris and a beautiful French girlfriend, but his real passion is his side job as a low-level operative for the CIA. All James wants is to become a bona fide agent and see some real action. So when he is offered his first senior-level assignment, he cannot believe his good luck until he meets his new partner, special agent Charlie Wax (John Travolta).

Reese's first test is to have Wax released from airport detention by the French Customs when Wax does not want to surrender the tins of his favourite energy drink. Despite the apparent triviality of an energy drink that Wax could probably purchase in Paris, Wax keeps orally abusing French Customs unil Reese places a Diplomatic Cargo sticker on Wax's luggage containing the energy drink which makes them immune from Customs and Quarantine requirements.

Once in the car, Wax apologises for his behaviour and opens the tins that contain pieces of his personal stainless steel pistol (named "Mrs. Jones") that he reassembles. Reese discovers Wax is a trigger-happy, wisecracking, loose cannon who's been sent to Paris to stop a terrorist attack. Wax leads James on a white-knuckle shooting spree through the Parisian underworld that has James praying for his desk job. But when James discovers he is a target of the same crime ring they are trying to bust, he realizes there is no turning back...and that Wax himself might be his only hope for making it through the next forty-eight hours alive.

Ultimately James learns that the terrorists, who he and Wax wiped out mostly, are targeting a summit and that his fiance Caroline (Kasia Smutniak) is one of them. Caroline attempts to suicide bomb the summit while the last remaining terrorist tries to attack the US Motorcade with a car that has a bomb. Wax takes out the terrorist with an AT4 rocket launcher before he can do any damage and James confronts Caroline at the summit. He tries to convince her to stop and is apparently successful at first, but when Caroline reaches to trigger her bomb, James has no choice but to shoot her dead. Wax disarms the bomb and the threat is over. Later, James, now an official agent, escorts Wax to his plane and Wax offers for James to be his full-time partner. The two play a game of chess and James reveals he carries a Desert Eagle, indicating he is more like Wax now than how he originally was.