‘Vinnaithandi Varuvaya’, (VTV) and you know what its like to cross the sky and get into another dimension called love. ‘Vinnaithandi Varuvaya’ is a popular lyric from the ‘Vennilave Vennilave’ song from ‘Minsara Kanavu’ directed by Rajeev Menon and all of you know that. So director Goutham Vasudev Menon has rightly acknowledged Rajeev Menon in the first card of the Titles. How humble!

Right from the time, the word ‘action’ was told, the film has been creating the ripples of expectation among director Goutham’s fans. He has surely tried his maximum to live up to the expectations. Captain Goutham and his team- comprising of editor Antony, art director Rajeevan, director of photography Manoj Paramahamsa and music by A R Rahman, just look at that combination, have always given us that feeling of modern cinema.

Well technically, the movie is made with high values- Exceptional music, background score, re-recording, classy camera work, foreign locations, etc. All the technicians involved must receive that imperative appreciation for they have done their work with much finesse.

The first in the list of technicians who have to be appreciated would be, undoubtedly, A R Rahman. Man! Isn’t he a creative genius! His 1st movie after the Oscar phenomenon. His music is one of the main reasons to the much acclaimed hype. The re-recording and the background score are really amazing. If you’ve listened to his songs in your personal stereo, then its only half of the magic you have experienced.

The picturisation of the songs is simply remarkable and they complete the magic. God knows how Goutham gets his ideas and the eye of Manoj Paramahamsa who’s done ‘Eeram’ before, not just his eye that thought of those exotic locations but his ‘lens eye’ as well that caught all those beautiful locales. Watch those videos even with half opened eyes and you’ll realize he hasn’t used a camera but a paint brush with the palette of colours from Mother Nature. The colour tones in the movie have been brought out quite amazingly. The songs especially, ‘Hosana’ and ‘Omanna Penne’ shot at Malta, are worth the watch at the cinemas. Songs get major attention in the movie and the other technician we are going to talk about is Rajeevan and his art-work in the sets of a few songs is fascinating. The D.O.P (director of photography) Manoj has used minimal artificial lighting in the movie, showing his signature style.

We’ll come back to the people behind the camera a little later. Now is the time for the people in front of the camera. Trisha and Silambarasan as the lead pair, and quite a few veterans in the movie like Kitty as Silambarasan’s father and Bob Antony as Trisha’s father. All artists have done well especially Ganesh, also one of the producers, who plays Silambarasan’s friend, has acted well, and his dialogue delivery must be appreciated. Lets talk about- Silambarasan! We’ve seen him as a college student, as a mass character and we’ve seen him dance in the middle of the road, typical Chennai style, but can you imagine Silambarasan in formals, as a simple, regular guy-next door, decent and at his best behaviour? Well, he has proved he is not just the normal run-off-the-mill commercial hero but an actor who will mould himself into any character that a story demands. He’s come out of that commercial image with VTV. All were apprehensive about the fact that Silambarasan working with a classy director like Goutham. But the director has been persistent about Silambarasan and he hasn’t let the director down. Silambarasan has been in front of the camera since he was a kid and such a role as ‘Karthik’ in this movie is really not demanding or impossible to him. He hasn’t acted in this movie, but has been himself. His dialogue delivery appeared to be simple, just like how he would talk to anyone in his real life. He is an ambitious and aspiring film maker in the movie and in real life, he really is.

Opposite Silambarasan is pretty lass Trisha. Trisha as Jessie has portrayed her character brilliantly, she hasn’t over acted or under acted, and she’s done it perfectly. Director of Photography, Manoj has prettified Trisha, and she looks prettier than her previous appearances. Saree clad in most of the movie, Trisha has pulled off a terrific performance. Nalini Sriram’s costumes might start a cult with the ladies from now on.

Now we’re moving in to the ‘story, screenplay and dialogues’, by Goutham. Don’t expect us to be spoilsport and reveal the storyline and the cute screenplay of the movie. The first half till the interval will grab your attention as it has been nicely written and well taken. Some cute scenes between Silambarasan and Trisha look really candid and the camera man has managed to capture that cheeky chemistry between the two. According to the film promos, theatrical trailers, etc ‘VTV’ is a love story ‘with a difference’. There wasn’t anything particularly different to talk about, except for Simbu being younger to Trisha by one year, and the screenplay that won’t tell you till the end if they’ve fall in love and live happily ever after?

Silambarasan wooing Trisha, their second pairing after ‘Alai’, is not at all impractical and you can relate their characters to real life. Their chemistry is enticing and they actually appear a cute pair. Silambarasan’s attitude in the movie is straight forward while Trisha is homely and conservative. The one thing you can’t relate to life or even agree is the hero meeting the heroine at her house, at his will without anyone noticing. Cinema has grown of age, or have people!?

A faster screenplay might spoil the feel of a romantic movie. Back to technicians, Editor Antony has done a decent job but could have advised his Captain to chop off a few reels. Some of the audience thought the movie got over and they got off their seats when a song was being played! but the movie continued for 10 more minutes after that.

Silambarasan, we all know fights well and dances amazingly. There is just one stunt sequence in the movie and that’s designed by Shiva who’s handled the fight scenes very well and Silambarasan is the demi-god we know, sustains not a single scratch on him. Silambarasan’s dance is admirable. Keeping in mind that most of the songs are not dance numbers, you’ll still see him sway to those tunes convincingly.

Dialogues in the movie and especially Silambarasan’s dialogue delivery is worth mentioning. The dialogues make you giggle at times, and sometimes they make you feel- how one can be so romantic.

Director Goutham has tried something ‘different’ but the audience is perplexed at the end. You wouldn’t know how to react after the climax. Weird! If you’ve been following all his movies and know his style of film making, then you would appreciate his work. There were rumours about two climaxes to the movie. The version the audience saw on the first day is not really lively. 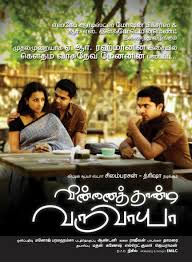 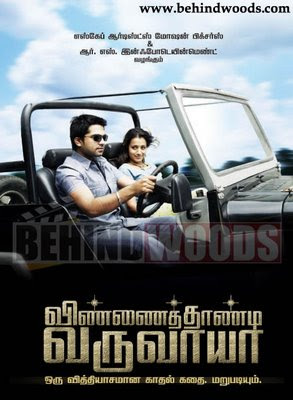 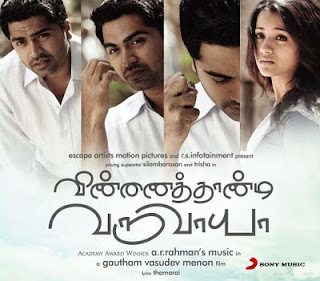