Viterbi algorithm is a well-known maximum-likelihood algorithm for decoding of convolutional codes. In this article this algorithm is described using the approach suitable both for hardware and software implementations.

Although convolutional encoding is a simple procedure, decoding of a convolutional code is much more complex task. Several classes of algorithms exist for this purpose: There are also soft-output algorithms, like SOVA (Soft Output Viterbi Algorithm) or MAP algorithm, which provide not only a decision, but also an estimate of its reliability. They are used primarily in the decoders of turbo codes and are not discussed in this article.

Convolutional Encoders
Like any error-correcting code, a convolutional code works by adding some structured redundant information to the user's data and then correcting errors using this information.

A convolutional encoder is a linear system.

A combination of register's cells that forms one of the output streams (or that is added with the input stream for recursive codes) is defined by a polynomial. Let m be the maximum degree of the polynomials constituting a code, then K=m+1 is a constraint length of the code.

A code rate is an inverse number of output polynomials.

For the sake of clarity, in this article we will restrict ourselves to the codes with rate R=1/2. Decoding procedure for other codes is similar.

The constraint length of this code is 7.

An example of a recursive convolutional encoder is on the Figure 2. 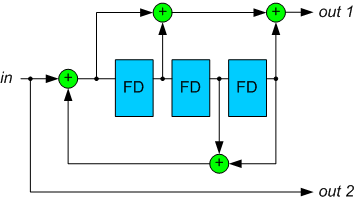 A convolutional encoder is often seen as a finite state machine. Each state corresponds to some value of the encoder's register. Given the input bit value, from a certain state the encoder can move to two other states. These state transitions constitute a diagram which is called a trellis diagram.

A trellis diagram for the code on the Figure 2 is depicted on the Figure 3. A solid line corresponds to input 0, a dotted line – to input 1 (note that encoder states are designated in such a way that the rightmost bit is the newest one).

Note that each state transition on the diagram corresponds to a pair of output bits. There are only two allowed transitions for every state, so there are two allowed pairs of output bits, and the two other pairs are forbidden. If an error occurs, it is very likely that the receiver will get a set of forbidden pairs, which don't constitute a path on the trellis diagram. So, the task of the decoder is to find a path on the trellis diagram which is the closest match to the received sequence.

Figure 3. A trellis diagram corresponding to the encoder on the Figure 2

A free distance is an important property of the convolutional code. It influences a number of closely located errors the decoder is able to correct.

Viterbi Algorithm
We will use the code generated by the encoder on Figure 2 as an example.

A soft decision decoder – a decoder receiving bits from the channel with some kind of reliability estimate. Three bits are usually sufficient for this task. Further increasing soft decision width will increase performance only slightly while considerably increasing computational difficulty. For example, if we use a 3-bit soft decision, then “000” is the strongest zero, “011” is a weakest zero, “100” is a weakest one and “111” is a strongest one.

A hard decision decoder – a decoder which receives only bits from the channel (without any reliability estimate).

A path metric – a sum of metrics of all branches in the path.

A meaning of distance in this context depends on the type of the decoder: In these terms, the maximum-likelihood path is a path with the minimal path metric. Thus the problem of decoding is equivalent to the problem of finding such a path.

Let's suppose that for every possible encoder state we know a path with minimum metric ending in this state. For any given encoder state there is two (and only two) states from which the encoder can move to that state, and for both of these transitions we know branch metrics. So, there are only two paths ending in any given state on the next step. One of them has lesser metric, it is a survivor path. The other path is dropped as less likely. Thus we know a path with minimum metric on the next step, and the above procedure can be repeated.

For a hard decision decoder, a branch metric is a Hamming distance between the received pair of bits and the “ideal” pair. Therefore, a branch metric can take values of 0, 1 and 2. Thus for every input pair we have 4 branch metrics (one for each pair of “ideal” values).

For a soft decision decoder, a branch metric is measured using the Euclidean distance. Let x be the first received bit in the pair, y – the second, x0 and y0 – the “ideal” values. Then branch metric is

Furthermore, when we calculate 4 branch metric for a soft decision decoder, we don't actually need to know absolute metric values – only the difference between them makes sense. So, nothing will change if we subtract one value from the all four branch metrics:

Note that the second formula, Mb*, can be calculated without hardware multiplication: x0^2 and y0^2 can be pre-calculated, and multiplication of x by x0 and y by y0 can be done very easily in hardware given that x0 and y0 are constants.

It should be also noted that Mb* is a signed variable and should be calculated in 2's complement format.

Path Metric Calculation
Path metrics are calculated using a procedure called ACS (Add-Compare-Select). This procedure is repeated for every encoder state. As there are 2^(K-1) encoder states, we have 2^(K-1) survivor paths at any given time.

The problem with path metrics is that they tend to grow constantly and will eventually overflow. But, since the absolute values of path metric don't actually matter, and the difference between them is limited, a data type with a certain number of bits will be sufficient.

There are two ways of dealing with this problem: Traceback
It has been proven that all survivor paths merge after decoding a sufficiently large block of data (D on Figure 5), i.e. they differ only in their endings and have the common beginning.

If we decode a continuous stream of data, we want our decoder to have finite latency. It is obvious that when some part of path at the beginning of the graph belongs to every survivor path, the decoded bits corresponding to this part can be sent to the output. Given the above statement, we can perform the decoding as follows: In these procedure D is an important parameter called decoding depth. A decoding depth should be considerably large for quality decoding, no less then 5K. Increasing D decreases the probability of a decoding error, but also increases latency. 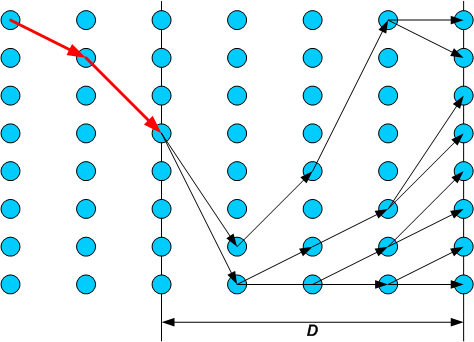 Figure 6. Survivor paths graph example. Blue circles denote encoder states. It can be seen that all survivor paths have a common beginning (red) and differ only in their endings

As for N, it specifies how many bits we are sending to the output after each traceback. For example, if N=1, the latency is minimal, but the decoder needs to trace the whole tree every step. It is computationally ineffective. In hardware implementations N usually equals D.

Advanced Topics
Punctured Сodes
Punctured convolutional codes are derived from ordinary codes by dropping some output bits (i.e. not sending them to a channel). The resulting code has higher rate (less redundancy) but lower correcting capability.

The standard puncturing matrices for the rate 1/2 convolutional code are: 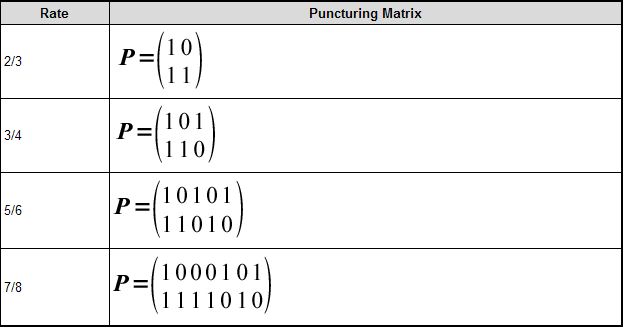 For example, consider a puncturing matrix for the rate 2/3. It means that we will transmit only every second output bit from the first polynomial, but every bit from the second polynomial.

In order to decode a punctured convolutional code, one need first to insert erasure marks to the places where deleted bits should be. This task is performed by a depuncturer. Then, the Viterbi decoder should ignore the erased bits during branch metric calculation.
Quantization

In order to fully exploit the advantages of soft decision decoding, the signal must be properly quantized. The optimal quantization thresholds depends upon a noise spectral power density. Quantization zone width (T on Figure 8) is calculated using the following formula:

where k is a soft decision width (in bits).

Conclusion
Using convolutional codes together with Viterbi algorithm can provide a large coding gain and good performance (a fully parallel Viterbi decoder implemented in hardware is able to process one input pair of bits per clock).

It should be noted that errors that Viterbi decoder can't fix appear at the decoder output in “bursts”, short erroneous blocks. For that reason, convolutional codes are often used in pair with Reed-Solomon codes.

Data are encoded firstly with a Reed-Solomon code, then they are processed by an interleaver (which places symbols from the same Reed-Solomon codeword far from each other), and then encoded with a convolutional code.

At the receiver, data are firstly processed by a Viterbi decoder. The bursts of errors from its output are then deinterleaved (with erroneous symbols from one burst getting into different Reed-Solomon codewords) and decoded with a Reed-Solomon decoder.